Welcome to What are you listening to?

An amatuer collection of gig reviews (more often that not, inebriated thoughts,) structured probing of others' musical tastes and whatever else that may come along.

Ashamed to say it but I've only recently discovered TV on the Radio. This was a song that I sometimes heard in my head but couldn't put my finger on it.

Laced with tinges electro, this song is a bit of stretch from my usual tastes but it somehow consumes me. Building perfectly, 'Wolf like me' is powerful and infectious.

Check out the video, I would love to hear your thoughts on this track.
Posted by Linzie at 3:12 PM No comments:

Email ThisBlogThis!Share to TwitterShare to FacebookShare to Pinterest
Labels: Favourites 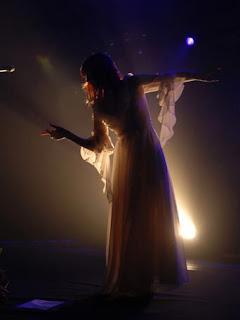 Anyone who has heard Florence Welsh sing either for a brief moment, or has devoured her entire recorded material for breakfast can assumingly all agree that she is like no other. After I felt the hair on the back of my neck stand up as I listened to her lyrically decorative and infectious music through my headphones, I knew I had to see her in the flesh. Although she uses session musicians, Florence sticks with what works and musicians who work well with her throughout the song writing process. This kinship only adds to the professional and sublime performance that dynamic creates not only enhancing Florence's natural talent, but has created quite the buzz in today’s popular music scene.


I arrived mid way through the opening act’s set – Earnest Ellis. I found my seat in the second last row and braced myself for the ever so popular red headed songstress to blow me away. Judging by the diverse crowd, made up of teenage girls, older women, groups of rowdy males, boyfriend and girlfriend duos and everyone in between, it was evident that Florence Welsh has hit the big time, not to mention her previous shows which have all sold out within minutes. Air time has given her the significant exposure, with songs like ‘You’ve got the love’, ‘Kiss with a fist’ ‘Dog days are over’ and more recently ‘Rabbit heart’, that have cemented her quirky yet relatable force with her audience.


I for one was happy to surpass the above mentioned songs, (particularly ‘Kiss with a fist’) and open up my musical receptors to the slinky, soulful ‘Girl with one eye’ and the windingly playful yet dark ‘My boy builds coffins’.
To be honest, although the opening act was slightly enjoyable, the crowd was yearning for Florence. Festival hall was buzzing with tension and fever, almost bursting at the seams as the black curtain dropped and hid the stage once the members of Earnest Ellis had vacated. The crew began running equipment and props to and fro and amidst the anticipation, I’m pretty sure the guy doing the mic check received a squeal or two.


As the lights teased the audience behind the black screen, I overheard girls behind me discussing what kind of costume she might appear in. All I can say is, if you see girls wearing gypsy style white wedding dresses you know where they got the inspiration from. Of course in her natural enchanting manner, she had the crowd reeling as the curtain dropped and the lady herself appeared beating her own drum to the opening song, ‘Drumming Song’
The commanding and heavy thrashing of the percussion throughout the opener couldn’t overpower the songstress’ voice as she sang perfectly in tune, not only throughout this song, but for most part of the set. As she flounced across the stage, gracefully waving to the crowd, it was clear that this show was going to be worth the poor seat and sore arse. Her voice, combined with the amazing sounds from her backing band– I know I wasn’t alone as I felt goose bumps creeping over my skin multiple times.


Florence kept up a high level of polite interaction with the audience and an ever higher level of energy. As she drank her wine through a straw, she joked about how dowdy it was. It was refreshing, (but not surprising) to see such an accomplished artist not take themselves so seriously.
The usually cavernous appearance of Festival Hall had transformed. The stage was beautifully lit with antique style birdcages complete with flashing light bulbs which bopped along with the rhythm. The five-piece band consisting of a keyboardist, guitarist, bassist/percussionist, harpist and drummer provided the vehicle and musical perfection to support Florence’s voice. With the personality each song has on record, the visual that was emitted on stage coupled with the passion from Florence greatly enhanced the individuality and resonance of her music when being performed live.


The set went full steam ahead. My favourites as mentioned before along with ‘Blinding’ and ‘Howl’ exceeded my expectations which were already quite high. During ‘Blinding’ whilst wearing a white sparkly cloak (Gregorian Masters of Chant style); Florence remained motionless until the lights systematically thrust themselves through the audience, around the second chorus or so. As her vocals rose and fell, Florence was somewhat possessed by the rhythm, which in turn, left the audience entranced with her.


Mid way through, the electric guitar was replaced by acoustic as ‘I’m not calling you a liar’ commenced. The acoustic earthy sound complemented the varying degrees that her voice can attain and once that acoustic was in place, I was craving to hear her voice against a string section (hopefully on the next record.)
A new song by the name of ‘Strangeness and Charm’, (written about two particles that remain once an atom is split and in her creative genius she has related this science to the tender feelings of human emotion) was tested on her adoring fans. I could definitely sense uncertainty in the crowd as this one went over – I for one didn’t mind it but I do prefer to dissect an unheard song on a recorded platform.
After the inspiring ‘Hurricane Drunk’, written about “running really fast with both fists pointed ahead” and ‘Rabbit Heart’ which I found had the least impact as it built and built but only got two thirds of the way there, (I’m not about to complain), things began to wind up. The crowd was humming with disappointment as the three big draw cards; ‘Kiss with a fist’, ‘Dog days are over’ and ‘You’ve got the Love’ hadn’t made an appearance.

After leaving the stage upon completion of ‘Rabbit heart’, the crowd chanted and stomped, desperate for more. Ten to fifteen minutes later, Florence and friends presented themselves, bursting into ‘Kiss with a Fist’, after a beautiful and possibly improvised instrumental deluge. Again, this sent her fans jumping as the song unravelled and I momentarily enjoyed the rock and roll rhythm and simple, light-hearted lyrics. At long last and undoubtedly the crowd favourites, ‘You’ve got the Love’ and ‘Dog days are over’ were seamlessly executed to finish of an amazingly impressive and memorable show.

I can almost personally guarantee,everyone who walked away from the show that night became just a little more enamoured with Florence and her Machine – unquestionably a shiny diamond of a show, and one that I not only felt honoured to see, but I won’t forget.
Posted by Linzie at 1:09 AM 1 comment: